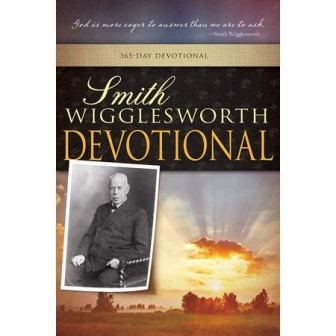 One day I met a friend of mine in the street, and I said, “Fred, where are you going?”

“Now, we have prayed together, we have had nights of communication, we have been living together in the Spirit,” I said. “Surely there is no secret that could be hidden between you and me.”

“I will tell you,” he said. “I am going to a spiritualism meeting.”

“Don’t you think it is dangerous? I don’t think it is wise for believers to go to these places,” I said.

“I am led to go to test it according to Scripture,” he replied. “They are having some special mediums from London.”

He meant that they were having some people from London who were more filled with the Devil than the Spiritualists we had in our city of Bradford. They were special devils.

“I am going,” he continued, “and I am going with the clear knowledge that I am under the blood of Jesus.”

“Tell me the results, will you?”

Now, beloved, I advise none of you to go to these places.

My friend went and sat down in the midst of the séance meeting, and the medium began to take control. The lights went low; everything was in a dismal state. My friend did not speak, but just kept himself under the blood, whispering the preciousness of the blood of Jesus. These more possessed devils were on the platform. They tried every possible thing they could to get under control for more than an hour, and then the lights went up. The leader said, “We can do nothing tonight; there is somebody here who believes in the blood of Christ.”

Hallelujah! Do you all believe in the blood, beloved?

Thought for today: Have biblical proof for everything you have, and then you will be in a place where no one can move you.

Smith Wigglesworth was a man who took God at his word, and God used his faith as a model for others. Explore these daily truths from Scripture and the writings of the Apostle of Faith, and you’ll quench your spiritual thirst, conquer defeating fears, be an effective soul winner, and see impossibilities turn into realities. 558 pages.

Buy This Book
From Amazon
From ChristianBook

Buy This Book
From Amazon
From ChristianBook

As an Amazon Associate I earn from qualifying purchases.

Have you ever read through the Bible in a year? Here are several ways you can do this in 2023. Read on to see if one of these will work for you.

END_OF_DOCUMENT_TOKEN_TO_BE_REPLACED

Kindle Unlimited is a subscription service that has been compared to Netflix for books. The current cost is $9.99 per month, and you get a 30-day free trial.

END_OF_DOCUMENT_TOKEN_TO_BE_REPLACED

What are some good Men’s Devotional Bibles? Here are a few of the best, covering a range of Bible translations. Give these a look and see if one works for you.